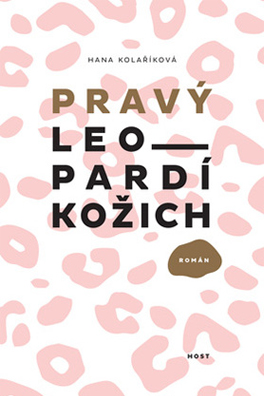 How loss can open up a dangerous path to the depths of the soul. A vivid novel of the present, replete with powerful imagery and eroticism.

Jana fell pregnant, Jana gave birth too early, Jana lost her child. How much family history can come out in the six weeks after the birth? And is one fate due to be repeated, like a hot potato tossed from one generation to the next? In Jana’s case, present and future nip at the past as a snake bites into its own tail, and the blood rings in her ears…

Hana Kolaříková has written a psychological novel about a woman who finds herself at crisis point following the death of her child. Who will guide her back to the light — her mother, her father, her husband, her lover or her closest girlfriend? Will Jana find the key to her soul in the depths of a family history which reaches back to the Holocaust? Or will she find it in Africa, which excites her senses?

Although Kolaříková has taken the traditional women’s novel as her ground plan, she has built something much more substantial.

The age of the male is over. The best Czech book of the year wears a leopard-skin coat

”A tip for Czech book of the year? How about Real Leopard-skin Coat by Hana Kolaříková (b. 1971)? This writer’s third work of prose has a lexicon and style all its own, plus a unique, feminine vision. Above all, it addresses a topic that fits the Zeitgeist like a glove.

Kolaříková sets the bar high for the stories she tells. She works with themes that tend towards kitsch and melodrama, and which have the potential to provoke the reader to emotion from one line to the next. Who could fail to weep over a dead child, an unhappy mother, or the travails of Jews dominated by Germans? A real leopard-skin coat is a great dancer on eggshells.

The author values her story so highly that she invests it with all the skill of her craft and the full power of her imagination. She connects reality to mythical, irrational sources. She activates in her female characters their deepest potential, producing a fierce, powerful blast of something universal, cosmic and unnameable. Kolaříková has written a very physical, sensual novel.”

”Kolaříková manages to capture the complexity of today’s interpersonal relationships. She strives to understand phenomena and causes of behaviour alike, along with who belongs to whom, even if people’s dreams bring them together with those they weren’t born among. In any case, they can’t deny their shared histories.”

Samsara of one life

”A psychological novel that is a meditation on the cycle of life and death and has elements of the Bildungsroman. It is also intimate female fiction, both tender and disturbing. In Real Leopard-skin Coat, the author views the life of a young woman in terms of her psychological and spiritual development, her place in society and from many other perspectives too.

[…] The novel comprises different layers and casts light and shade on society, psychology and even spirituality on many different levels. The reader can interpret the story in his/her own way. […]

Hana Kolaříková has produced a high-quality, tender, meditative, readable and profound feminine work that is sure to attract readers from across the spectrum of human personalities.”

”Kolaříková has produced a highly concentrated, some might say responsible work. Her style is plain; the primary source of the emotion resides not in the words themselves but above them, in situations and attitudes. Real Leopard-skin Coat is often characterized as a psychological novel, as its main emphasis is on the inner world at the expense of the outer. Although the author has captured a female environment, this should certainly not be called a woman’s book: it goes beyond gender stereotypes with such nonchalance that we barely notice them. ”

”A highly readable novel about a woman who has lost a child, Hana Kolaříková’s new novel is both spiritual literature and a story about the cruel legacy of the Holocaust. Real Leopard-skin Coat is a captivating ballad in modern guise. […]

Kolaříková succeeds in being both poetic and hard. She uses vulgarisms only exceptionally and purposefully. Some passages produce dream-like images by the copious use of impressive metaphor. In place of a chapter heading, she frequently opts for groupings of themes the chapter contains, so producing the effect of a surrealist poem which is tune with the book’s atmosphere. Such groupings include: pearl mussel weeping, stray guardian angel, black-and-white full moon, gloomy Sunday, song for an owl.

Real Leopard-skin Coat has obvious features of the Bildungsroman; its characters undergo inner transformation and search for higher truths. Although they often grope around for this truth and fail to find it, possibilities remain open. The book can be read as more than just a story of spirituality: Kolaříková tells of tragic moments whose effect continues to reach into people’s lives long after they happen.”