Get Your Bare Foot Off Your Brother!

Do your little darlings sometimes give you a real headache? They do? Then read this book with them. No family therapy could be more entertaining!

Be ready for you and your kids to have some fun.

Marek has a ‘horrible’ brother. At least that’s how he sees it. Marek calls his brother Weirdo. The thing is, at a certain age all younger siblings are horrible, because the age difference is as deep as the Mariana Trench. Any excuse will do for a fight or an act of spite, with no let-up at weekends. On this day as on all others, the brothers are pushing and shoving each other. Then something goes wrong in the bathroom, and they find themselves falling down the toilet. Having slipped through a narrow pipe, they arrive in a maze of more pipes. This isn’t as impossible as you might think, especially when you’re six and three quarters. Getting out of this mess will be no easy matter. Our little heroes will have more than one setback to contend with. In fact, without the help of readers, the case would be hopeless. This interactive illustrated book is for siblings large and small.

Zuzana Čupová (born 1995) is completing her studies in Animation at Tomáš Baťa University in Zlín. So far, she has made two short animated films, Wedding Day / Veselka and Cloudy / Pod mrakem. She also likes to illustrate, draw, write comics and design rubber stamps.

"Get Your Bare Foot Off Your Brother is a wonderfully punk-subversive book.  It doesn't mince its words and no wonder, because the two little heroes fall into a toilet during one of their frequent fights and have to wander around for a while before they find their way out.  Along the way, they crawl through the unalluring pipes, meeting their slimy denizens.  At first glance, to be sure, nothing very nice, cute or appealing, nothing for softies or the oversensitive.  But that’s just as well. Children are all fond of talking about excretory processes, as they're a little repugnant, a little forbidden and a little ridiculous.  All children are also interested in those spooky, mysterious spaces and corners in the house - the drains, the spaces under the bath, dark pipes and corners full of spiders and who knows what else.  Most children also have a sibling they like, but who just gets on their nerves sometimes. This book has all of that, so children can satisfy their childish curiosity, their urge to provoke and to play brinksmanship, to deal with their fears, in short to tease snakes with their bare feet.

The narrative is funny and flows nicely as it moves  forward towards its goal. It’s just the kind of fantasy story where you don’t ask if it's possible, you just go along with the game, because through it you can visit places that both horrify and yet attract you, places you'll never get the chance to visit. It is also a journey to discover yourself and your relationship to your surroundings. In fact, the journey through the waste itself is essentially a metaphor for coming to terms with the environment and the people within it, as well as  finding your own place there. The adult world is viewed through the chief protagonist’s eyes in a dramatically ruthless way. Like the pipes, all the adult characters are twisted by ordinary life, so the children have no choice but to wend their way through these secret, inscrutable corners and find their way round them.

The excellent illustrations by Zuzana Čupová also make the book an attractive object in visual terms. These illustrations include numerous hidden quizzes, searches and solutions."

"One Sunday, as two brothers are pushing each other around, they inadvertently fall into the toilet, slip through a narrow duct and find themselves in a labyrinth of pipes. How is this possible? A  wonderfully round-the-bend book that only a child's imagination could ever match, with an interactive adventure that’ll keep all big and little brothers and sisters busy, while mums and dads can take a breather."

"Based on its extraordinary concept and aimed ideally at children of a younger school age, this book was written by film scriptwriter and author Irena Hejdová and copiously illustrated by animator Zuzana Čupová.

The filmmaking experience of both its creators is very evident in this book. The plot about a boy who’s constantly annoyed by something about his four-year-old brother until they both fall down the toilet into the city sewer, is really fast-paced and dynamic to the point of frenzy. In so doing, however, it makes use of the most familiar and accessible realia from our domestic lives. All of this is complemented throughout the story by playful tasks for the reader.  (…)  Here’s a little book that really pulls it off, with a fine moral message about sibling love."

"Marek and Jirka (called Weirdo by his brother), embark on an adventurous journey through the sewer pipes while never once fighting! Their tribulations are sure to bring tears of laughter to the eyes of readers both young and old. This bookful of challenges provides high-quality entertainment, and not just for long winter afternoons. (…)  The story is narrated by seven-year-old Marek, whose streetwise voice instantly wins readers over. (...)  Get Your Bare Foot Off Your Brother was illustrated by young artist Zuzana Čupová (born 1995). Her figures are very expressive - they have big eyes and other distinctive features, which, for example, add to the urgency of the scene when all three children and their mum start screaming. (…) If you have any ideas of calming your kids down at bedtime then this book will do you a disservice, as you’ll be in fits of laughter along with them at least the first time you read it, so best only open it if you and your children are exclusively dependent on the home environment for an extended period of time, which can be filled by a number of attention-extending exercises. Hopefully some cold, tonsillitis or lice will turn up."

"When the sibling rivalry between seven-year-old little rotter Marek and his four-year-old brother Jirka, nicknamed Weirdo, results in their disappearance down the toilet then anything can happen. When their toddler-aged sister good-manneredly flushes them away then their fate is set in quite eloquent colours thanks to Zuzana Čupová’s pastels, but then their constant ‘me, me’ suddenly turns into ‘we’. As if it were normal, the brothers now collaborate over their salvation, inseparably walking the readers through twisting labyrinths, solving puzzles and conversing with tapeworms, as they are led up to the sink through a pipe more tangled than Medusa’s hair, lined with slime and dogged by the ambushes of the local monsters and other adversities caused by even more unruly users of the sewage system." 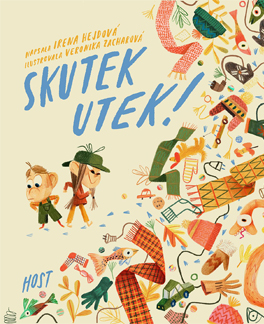