One, Two in the Woods 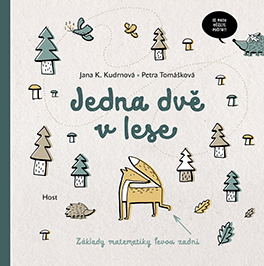 The basics of mathematics, made easy-peasy

A book about maths would be pretty boring – if it weren’t such fun! Numbers, rules, timings and geometric shapes are everywhere, and by knowing what to make of them, we make our lives much easier. The maths lessons in this book will not only get kids out of their chairs, they will take them outdoors and into the woods, up to the treetops and along the swollen stream, with animal guides including Harry the hedgehog and Susie the caterpillar.

Unconventional in approach, this book develops children’s pre-mathematical thinking. Most adults remember only a fraction of what they suffered through in primary-school maths class, so the mere thought of the maths homework their preschoolers will soon be bringing home may make them anxious. This charming, witty book will please parents as well as inquisitive preschoolers and primary first graders.

Petra Tomášková (1982) graduated as a mathematics and geography teacher at the Faculty of Mathematics and Physics and Faculty of Science in Charles University. She focuses on creative mathematics teaching for a broad range of pupils from the last years of kindergarten to grammar school students. She is currently on parental leave with her fourth child.

Mathematics can be quite enjoyable, especially when it becomes apparent, as in this lovely children’s book, where and when it can be helpful in any situation. For example, in the woods: for counting leaves, acorns and little animals; to measure the length of a branch or the length of a snail slime trail; for recognizing geometric shapes formed in a forked branch or spaces elsewhere. The book’s seven chapters offer numerous suggestions for the playful use of mathematical elements such as repetition, order, numbers, arithmetic,  geometry, or measurements. Included are problems and riddles, which children can solve in the out-of-doors or at home. For adults, there are additional tips at the end of each chapter on how to discover the basic principles of mathematics together with children. The many tiny illustrations of hedgehogs, birds, plants, trees, etc. that are strewn through the book’s pages inspire and encourage the reader to count, measure and look a little more closely.

"A supercharged collection of simple yet clever ideas to instill a basic understanding of mathematical principles in the youngest children. (…)

In these times of homeschooling, this new Host book, One, Two in the Woods, has come out very much on cue. It’s meant for both children and parents, offering them games to improve numerical, movement and memory skills in particular, advising on how to train spatial imagination, while also clearly explaining such basic mathematical concepts as central and axial symmetry and number decomposition. However, its primary aim is not to teach maths to preschoolers and first-year pupils, but to teach children to perceive the mathematics around them, i.e. to perceive the ever-present mathematical order of the world. Brimming with ideas, this book does not have any drill or dry-as-dust calculations, which would not have been worthy of this joint brainchild of three seasoned mothers, who are naturally attuned to children’s open minds, do not separate learning from play, and call the universe around them, especially their beloved forest, an ‘open laboratory of the world’. Illustrator Jana Kloučková Kudrnová, teacher Petra Tomášková and subject author and Publishing House editor Pavla Nejedlá share their love for nature, language and children, which abounds in their ‘forest maths’.

A forest without greenery, maths without tedium

It is immediately obvious that everything about it has a solid basis: this large square-format hardcover book is properly bound, the paper is not glossy and the shades of colour selected are appropriate to the topic (the artist made a resolution to illustrate a book about the forest without using any green!). The structure is transparent and strictly adhered to, which is the be-all and end-all for navigating a highly diversified book like this: there are seven chapters with an introductory double page, golden yellow like a fallen maple leaf in mid-November, opening each new subject area (regularity, arrangement, geometry, the world of numbers, reflections and images, counting and measurement), while the paragraph that a journalist might call the lead or eye-catcher does not neglect to demonstrate the extent to which mathematics is imbued in the language itself: “Children might sometimes pretend they can’t put two and two together, but they can be naughty twenty-four seven. They talk nineteen to the dozen, but they can tell you a thing or two. Basically, they’re right ones, yet counting is in their blood.” The conclusion of each chapter is designated in blue, or some might see bluey-grey, like a horizon dissolved behind a curtain of rain. This is the key to the previous math problems and a guide to building on this knowledge. The pages are enlivened by monochrome photographs of children, to illustrate the recommended activities. An ideal way to wordlessly tell children, “Come on, let's try this too!” Exempla trahunt, as the Romans used to say.

A chest full of ideas

Between the yellow and the blue, three double-page spreads can be found with stylized illustrations, sometimes among hollowed trees, sometimes by a stream or in rugged natural terrain, full of simple math problems that can be solved by children aged around five. The range on offer is broad, working with the pictures in the book, and there are instructions for outdoor and indoor activities, while the entire thematic section tells the story of favourite forest animals, led by Jarda the hedgehog, Janek the stock dove and Brumla, who has the biggest backside in the entire forest.  Now and then they utter funny phrases, written in capital letters inside comic bubbles, which will be appreciated by the first-time readers whom these jokes primarily target (Grey Wolf: "I smell prey a hundred miles away." - One hedgehog to another: “Move it or you’re done for.”)  The activities presented in the book require virtually no preparation or sophisticated aids. (...) The aim of this forest fun is to teach children to perceive regularity, to stabilize numerical concepts in their memory and to build up solid powers of estimation. When explaining more ‘complex’ principles or developing tasks, the author, herself a mathematics and geography teacher, also appeals to children’s independence and deliberately works with mistakes, i.e. the animals imitate each other, but sometimes they don’t get it right - and the children have to work out the mystery. The playful book One, Two in the Woods is an ambitious collection of ideas that are quite unremarkable in themselves but which have some great science behind them, based on an understanding of the key principles underpinning not only mathematics, but also the foundations of language and art."

"Two authors gifted with the ability to arouse curiosity, five kinds of indoor and outdoor activities, seven chapters, eighty-eight pages, countless pictures, photos, games and quizzes, as well as little stones, pine cones, trees, leaves, beavers, wings, earthworms and stars in the sky - this is the formula for a book about playful mathematics, which in this forest seclusion does not intimidate you with abstract theory or boring decryption games, but turns into a magical key for understanding the universe, based on a natural interest in the surroundings and the eternal need to achieve harmony between the inner and outer world.  The forest offers an inexhaustible supply of opportunities to spot regularity, experience repetition, look for connections and sequences, perceive spatial relationships, admire symetry and formulate the first mathematical principles, perhaps by looking at a changing shadow during a walk.  After all, even Sir Isaac Newton made his most important discoveries while engaging in seemingly pointless observation of nature, not to mention Leonardo and Fibonacci. So one book plus a helpful adult guide plus an unlimited audience can produce more science queen geniuses."

"It was not until my first love at the Maths and Physics Faculty that I discovered what a fascinating discipline mathematics is. I had not been fortunate enough to have teachers who were able to convincingly present me with the world of mathematics all around us, which makes me wish all the more that my children might have a more helpful introduction to this field. One of the most useful aids is a book by Jana K. Kudrnová and Petra Tomášková, One, Two in the Woods, which has several things going for it. From an aesthetic standpoint I applaud this publication’s graphics, which are not exactly ablaze with colours, but still remain playful. Visual restraint in children’s books is very much the exception; it’s an art to show them that unremarkable exteriors might be concealing unimagined adventures. Jana Kudrnová’s forest is in several shades of sandy, brown and bluish. Thanks to the cute minimalistically conceived figures drawn with distinctive lines and the effective layering of the coloured areas this does not come across as doleful or sterile. The text sections are not hard going, but quite the contrary, games involving language and phrasemes from the world of numbers lurk on every page. The authors have succeeded in clearly showing that no discipline is isolated in a vacuum, as children in most schools are still being led to believe. Maths lessons can be held playfully in forests, for example, with pine cones, little stones and sticks, or for that matter, materials that naturally cling to children. This teaches them that mathematics is a world that surrounds them, and all they need to do is keep their eyes peeled, hence it effortlessly induces them to be creative. Unlike ordinary, stereotypical textbooks this one leaves room for the readers’ own inquisitive questions. This is a neat guidebook, not a dogmatic instruction manual, which as the mother of two independently thinking beings I perhaps appreciate more than anything else."