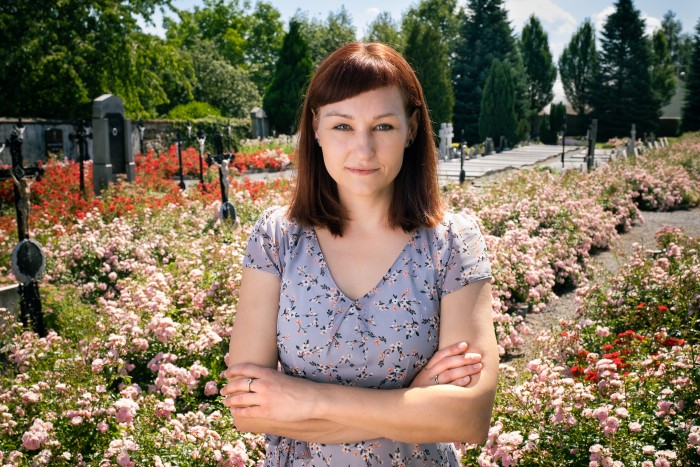 Her novels change rules, bring to light long-buried topics and events, and engage the public with them. For these reasons and others, Kateřina Tučková has been awarded the State Prize in Literature, one of the Czech Republic’s most important writers’ prizes, which is conferred annually on the occasion of Czechoslovak Independence Day (28 October).

She is only the third woman to win the prize since it was reinstituted in 1995. The prize is typically conferred on an author for a single original literary work, although it may also be conferred in recognition of the author’s body of work to date. Tučková, one of today’s leading Czech writers, has received the award for Bílá Voda, a novel inspired by real events that recalls a period of totalitarian injustice while addressing the position of women in the church and society in general. Tučková worked on the book for ten years, and the attention it earned on publication was very well deserved.

‘Naturally I am delighted to have been awarded the State Prize in Literature,’ Kateřina Tučková said. ‘When the news reached me, I felt a little awkward, believing as I did that such an important award is for lifetime achievement. I plan to write a few more books yet! I was relieved to learn that the award is primarily for the novel Bílá Voda, which means a great deal to me. After all, I spent a whole decade on a personal spiritual journey that was sometimes tightly, sometimes loosely intertwined with the stories and thoughts of the novel’s characters. I consider it the high point of my achievements as a writer so far, and I am gratified that the jury of experts saw it in the same light. I am also gratified by the remarkable fact that in over twenty years of the prize’s modern existence, I am only the third woman to receive it. I accept it not only as an appreciation of my most recent novel, but also (I hope) as a contribution to the righting of past wrongs – as well as a reflection of the fact that the Czech literary scene now boasts a strong, unignorable generation of women writers who look at today’s Czech society in unique ways.’

Tučková’s earlier works, too, have met with great acclaim. She burst onto the literary scene in 2009 with Gerta, a novel about the post-World War II expulsion of Germans from Brno and the Brno death march. Powerful emotions evoked by events recalled in the novel contributed in 2015 to the approval and signing of ‘Declaration of Reconciliation and a Common Future’. In this document, representatives of the City of Brno apologized for the so-called wild expulsion of the German population in the last year of the war.

Gerta was followed three years later by the novel The Last Goddess, about generations of folk healers in Moravské Kopanice. For these two novels Tučková received Magnesia Litera prizes and, in 2017, the Institute for the Study of Totalitarian Regimes’ Prize for Freedom, Democracy and Human Rights.

Her next book was The Factory, the story of leading Brno textiles entrepreneur Johann Heinrich Offermann, published in conjunction with the exhibition Brno: the Moravian Manchester. In 2018, Tučková published Vitka, a stage play inspired by the life of composer and conductor Vítězslava Kaprálová. The play premiered at Brno’s Goose on a String Theatre in the same year.

Kateřina Tučková’s most recent novel, Bílá Voda, was published in April this year to extraordinary acclaim. Indeed, it went straight to No. 1 in the Association of Czech Booksellers and Publishers’ Fiction Bestsellers chart, where it remained for twelve weeks. At the time of writing, it has sold 75,000 copies, a success now amplified by this important prize.

Kateřina Tučková’s books have so far sold a total of 350,000 printed copies, making her one of the most popular of all Czech writers. The work explores hitherto overlooked topics, and its writing is preceded by exhaustive research of archive materials. Many of its themes are driven by the stories of women with very difficult lives. Tučková’s work can be said to have contributed to the rise of other outstanding Czech women authors.

‘As well as being an appreciation of artistic excellence, the State Prize is an endorsement of values represented by the work’, said Miroslav Balaštík, editor-in-chief of Host Publishers, at the awards ceremony. ‘In the case of Kateřina Tučková’s Bílá Voda, these notably concern the equality of men and women, and rejection of oppression imposed by organs of power and all kinds of discrimination. The best appreciation of this work would be for our state to be guided by these values, in addition to celebrating them.’